I found this little spot in the Bakewell area of England, located at the bottom of a valley.
There were a few wild bird feeders and a nice little river with some ducks trying to swim in the river current. 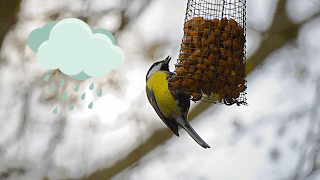 It had been raining heavily, so parts of the river had started to overflow, which was not good.
You can see in this video that the little ducks are trying to swim in the current, but it is really strong.

The wind was picking up and becoming really strong. I tried to film these little animals, but you can see how strong the wind was.

Quite a few of the leaves on the ground were twirling, and a lot of the animals suddenly appeared. My guess is that they knew a storm was due and were getting some food before it started.

Light was fading as well, so I had to be quick trying to film. I looked in the trees and there was a squirrel looking down.

I don't think he was happy as the birds were eating his food. After a few minutes, he chased a few of them away.

Here is the video. It is only short as I had to make my way home before the storm started fully.

Storm on the roads
Well, after around half an hour of leaving, it was pitch black, dark and really windy. Strong winds and heavy rain.
The bad weather was causing a lot of the water to overflow into the rivers and then onto the village countryside roads, which have no drainage or lights, so not the best conditions to drive in at night, but I got home OK.