WattoPhotos Made It Into The Newspaper

I was sitting at my desk editing some of my photography photos I took the day before when I heard a loud noise, so I looked out the window and thought surely they couldn't be an Apache helicopter in Manchester.
To be honest, I thought at first I was seeing things as they approached in the distance. I knew they were helicopters but thought there was no chance two Apaches would fly over Manchester.
But I scrambled to get my camera anyway, as I thought it was a good time to practise filming on my camera, as I had not used the video function much by this time. 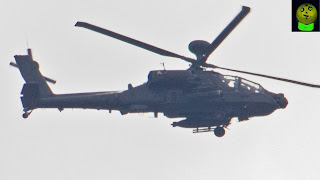 I must say, it is a rare sight to see two gunship helicopters flying over a city like Manchester.

If you're wondering why it is rare, the Apache Helicopter is a war-type helicopter with around 67 based in the UK. They are said to be the best military helicopters in the world.

Because they are the best helicopter in the world, they are used by the United States, the United Kingdom, and a number of other countries.

They were mainly used in the recent conflicts in Afghanistan and Iraq and will most likely be used for a long time.

My video and photos were published by MEN news after I sent them to them. I did not think the quality was good enough for the paper, but it was.

No, I did not get any money from the video or photos. If you're wondering, they did credit my name (Watto Photos), which was good to have some recognition for my camera work.

I mostly keep to photographing nature and animals in the countryside, but when you see a rare event like this, you have to take the opportunity to snap a few photos, and if it can get Watto Photos more recognition, then it is a bonus.